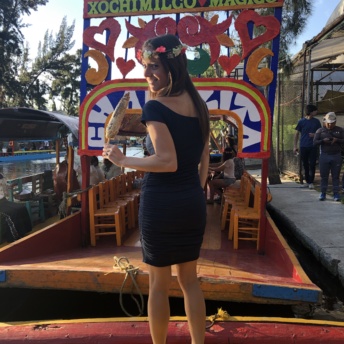 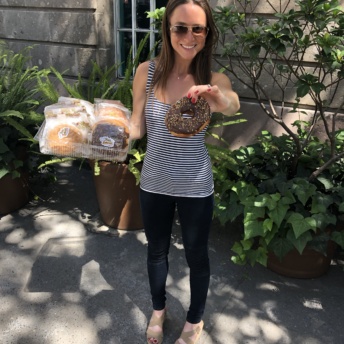 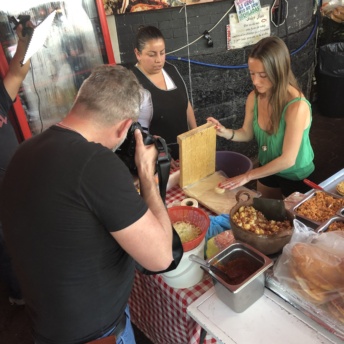 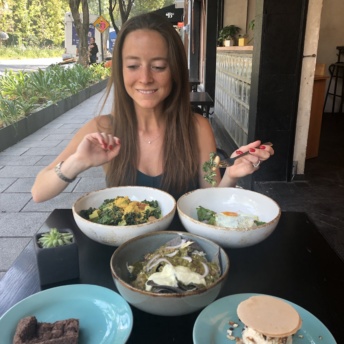 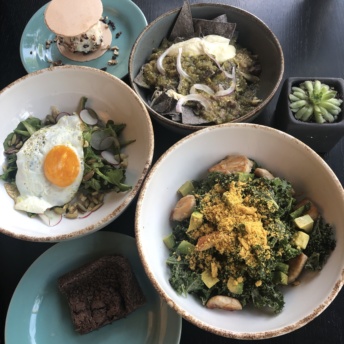 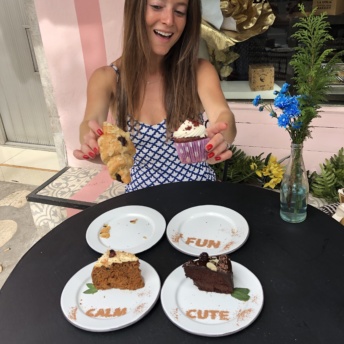 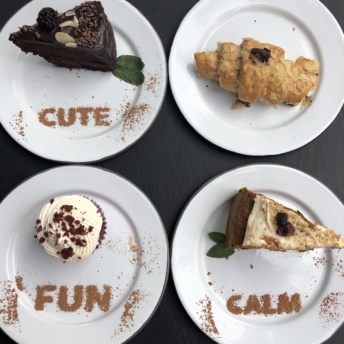 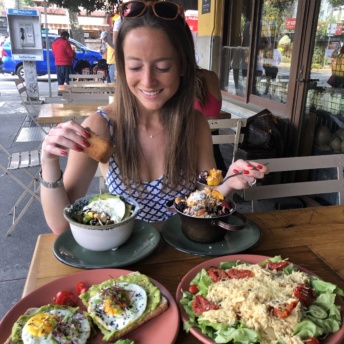 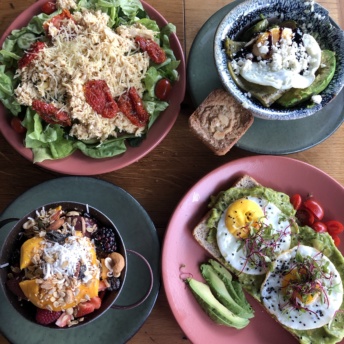 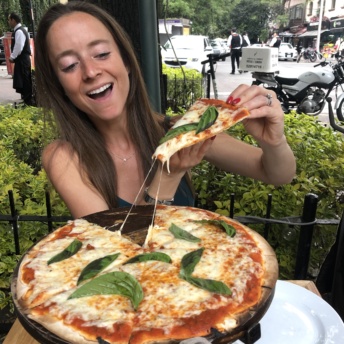 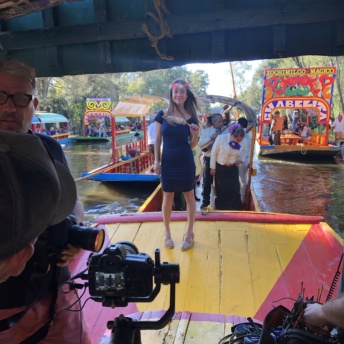 I visited Mexico City for an advertising shoot in February! It was such an honor to work with Chase and Marriott Bonvoy for their campaign on the Marriott Bonvoy Boundless Card. And here is the link to the TV commercial! I have used Chase credit cards & bank accounts for years and enjoy staying at Marriott hotels so it was a natural partnership 🙂 I love to travel, and I don’t let celiac stop me from exploring the world! Mexico City has lots of gluten-free options – it makes me so happy finding safe and delicious food when traveling!

The shoot was a full three days. The first day was a scout day where we visited a bunch of locations to scout the area and to see what time of day is ideal for lighting and traffic. I was in front of the camera so they could do test shoots and see what worked best. The director, producer, photographer, and the rest of the team then put together a call sheet schedule for the next two days to ensure that it flowed well and that the light was ideal for all locations. There was also a local production team – they were key in providing local information such as translating and sharing how long it would take us from location to location since traffic can be an issue. It was amazing to see how much effort goes into a shoot and how many people are involved! I have a new level of respect for anyone on the production side.

Everything was incredibly natural for this shoot. I did my own hair and makeup which as you guys know is super minimal! Before the shoot, I made sure that they knew I really don’t wear makeup, and they were completely fine with that. I wear a bit of bronzing powder, bottom eyeliner, and mascara. I honestly don’t know anything more about makeup beyond that 😉

For the next two days, we shot all over Mexico City! They did wide and intimate shots, photo and video. We started off at Hotel Condesa df which is a European style hotel. I had breakfast on their rooftop, biked out front with gluten-free pastries from Pan Gabriel, and enjoyed more gluten-free pastries and a Mexican hot chocolate in the hotel room.

We captured shots at a street food market and various architectural spots. I learned how to make corn tortillas by hand with a local. This was so fun, and I loved how she taught me via hand motions and body language. I made my own tacos and of course ate a lot of them! Later that day, I enjoyed fresh watermelon juice and tacos in a local plaza.

We visited a mezcalería at night. My favorite part of the shoot was at the Canals of Xochimilco! Xochimilco is a borough south of Mexico City, known for the colorful gondola style boats called trajineras. These wooden boats are hand-painted in bright colors and float along the canals. We had a mariachi band playing, and I danced to their music while eating elote {Mexican corn} on a stick!

We wrapped that night, and my husband Brendan met us out for dinner. Brendan and I spent the new few days exploring and eating Mexico City together which are all detailed below! I’m glad that he was able to join me for part of this trip.

My commercial has been out for the past few months, and it has been SO amazing hearing your responses! I haven’t seen the video on TV myself yet so I really appreciate you sending videos and screenshots of it! Maybe I should get cable lol. I’ve seen my print ads on Instagram, Instagram Stories, Facebook, Pinterest, and Snapchat which has been pretty cool!

One of our first stops was Hungry Beast which is 100% gluten-free! It’s a fun juice bar with lots of breakfast options, bowls, sandwiches, burgers, and desserts. They have vegan, vegetarian, paleo, and keto options so there is something for everyone. It’s very similar to a typical juice bar or cafe in the US. We had:

La Otila is an 100% gluten-free bakery, and everything is sugar-free! All of their desserts are sweetened with agave, coconut sugar, and/or monkfruit. I quickly learned that all the gluten-free desserts I had in Mexico City were also sugar-free. I was most excited to go to this bakery. Some of the taste was sacrificed since it’s sugar-free but I did love their atmosphere, dish presentation, and their huge variety of desserts. I’m still looking for a bakery that can nail a gluten-free croissant – it’s hard to execute! La Otila offers breakfast options such as egg dishes, fruit, yogurt, and quiche so you can come here if you want something savory as well. We shared the following:

Ojo de Agua was so delicious that I came here twice! First with the production team and then a second time when Brendan came to Mexico City 🙂 It’s a juice bar and cafe – they have gluten-free bread available upon request and they have vegan options as well. Everything is colorful and fresh. They have 10 locations throughout Mexico City. I had the acai bowl and breakfast bowl on my first visit. Their gluten-free cakes are packaged separately and in their own basket – they come in almond, coconut, and matcha flavors. On my second visit with Brendan, we shared the following:

Pan Gabriel is 100% gluten-free, 100% vegan, organic, and sugar-free! They use stevia and agave nectar to sweeten their desserts. I had a few of their donuts and rolls throughout the shoot, and it was such a treat 🙂 They offer the following:

Brendan and I shared a gluten-free Margherita pizza at Rocco & Simona, and this was one was of the best pizzas I’ve ever had! It seems silly to have pizza in Mexico but I gotta give props where it’s deserved 🙂 I highly recommend their pizza. Rocco & Simona also offers salads and vanilla ice cream for dessert.

If you looking for typical American food, Morton’s has a gluten sensitive menu with lots of bar bites, appetizers, salads, prime steaks & chops, and seafood. They have over 70 locations across the world. I’ve had the jumbo shrimp cocktail, chopped spinach salad, lobster tail, and sauteed broccoli florets (request without breadcrumbs).

I discovered The Counter Burger in Los Angeles, and they have 37 locations across the world. There is no cross contamination in the fryer so their fries are safe and SO good! I love the parmesan fries and sweet potato fries. Gluten-free buns are available upon request so you can get a burger. You can also top a salad with a burger, and their milkshakes are delicious.

The Palm has 24 locations, and they’re known for their steaks and chops. They also offer salads, seafood such as lobster, and veggie sides. I always get the flourless chocolate cake with dark bittersweet chocolate & creme anglaise, fresh berries, & whipped cream for dessert!

Here’s a direct link to a list of the Mexico City restaurants I’ve been to and reviewed:

My week in Mexico City was incredible! It’s such a vibrant city, full of culture. I will definitely be back! 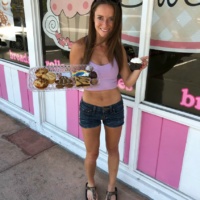 My Gluten-Free Criteria When Eating Out and Shopping 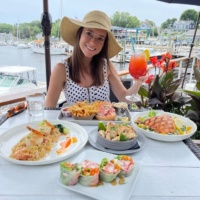 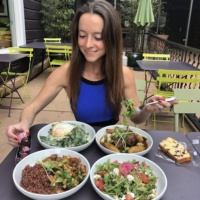 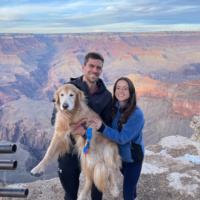